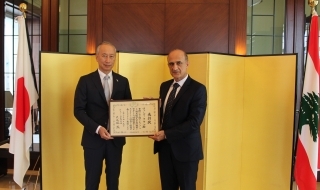 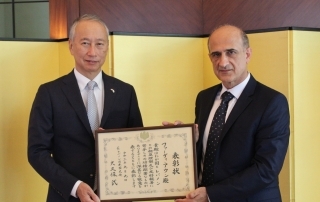 The Embassy of Japan in Lebanon is pleased to announce that on Sep 9, Ambassador Okubo conferred the Ambassador’s Award on Mr. Fadi Aoun, incumbent President of International Shotokan Karate Federation (ISKF) in Lebanon in appreciation of his outstanding contribution to deepening friendship between Japan and Lebanon through Karate.

As a president of ISKF, Mr. Aoun has demonstrated his strong leadership in promoting Karate through training Karate players across Lebanon and leading various relevant Karate events for 20 years.

H.E. Mr. OKUBO Takeshi, Ambassador of Japan to Lebanon, praised his achievements and expressed his hope that he would continue training and educating Lebanese youths through Karate, who will play an important role in building the future of Lebanon.