Video Message by State Minister for Foreign Affairs of Japan WASHIO Eiichiro, at the International Conference in Support of the Lebanese People 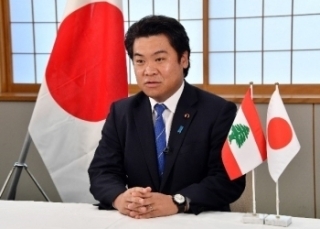 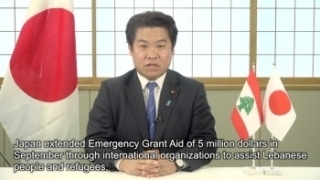 On December 3 (JST), co-hosted by the Government of France and United Nations, the International Conference in Support of the Lebanese People was convened online; and State Minister for Foreign Affairs of Japan WASHIO Eiichiro, sent a video message.

State Minister for Foreign Affairs of Japan WASHIO Eiichiro remarked on Japan’s humanitarian assistance to Lebanon which is hosting Syrian refugees (totaling 220 million dollars since 2012), emergency assistance of about 7.6 million dollars to tackle COVID-19 in Lebanon, and provision of emergency relief goods and Emergency Grant Aid of 5 million dollars after the devastating explosion in Beirut in August.

State Minister WASHIO pointed out that what matters most is that those international supports should be effectively and meaningfully utilized for the benefit of Lebanese people, adding that Japan strongly hopes that the Lebanese Government will implement administrative, financial and judicial reforms in a rapid and transparent manner. State Minister WASHIO also expressed concern over the current situation in Lebanon where the reform implementation has been left behind, and called for the early establishment of an effective and better-functioning government so that necessary reforms will be implemented as soon as possible.